The little guy finds home in the big city

Four weeks ago, my friend and I went to my family's cabin for the weekend. While there, we did something I've never done in the 20 plus years since building the cabin: we went to Bay City for the Rice Festival. It was a day of cool air and warm sunshine; we were headed to the beach. But crossing paths with a neighbor changed our direction. The neighbor went on and on about the festival, she was on her way there. She spoke of the artists' booths on the grounds of the downtown courthouse, she spoke of early Christmas shopping. She spoke enough about it that our curiosity was hooked. My friend and I decided to head that way and then go to the beach afterwards. And that decision planted the seeds to a big change in my friend's life, and what I would be doing with my time this past Saturday.

With Cheyenne on the leash leading the way, my friend and I weaved in and out of the booths, enjoying the people watching and the artists' wares, enjoying a day outside in small town Texas. We walked the square, rounded the corner and there it was. Dogs available for adoption. The first words my friend spoke were, Oh no. She'd been considering adopting a dog for several months but hadn't found the right one in size, temperament and age. Until she saw him.

She made a small donation and received some treats in return, squatted near the crate and offered the goodies that he excitedly accepted. He licked her hands while she asked questions about him and learned what was known about his story. Before ten minutes had passed, she had the application in hand and we were sitting on the courthouse steps filling it out. Another 30 minutes later, I was dragging her away from rubbing his belly and getting sloppy kisses in return.

My friend did some research on the rescue facility and waited for a phone call. She paced, fretted, would not cease talking about him, hoping he could be hers, believing that they belonged together and she was the human that could love him and provide him a good life in his forever home.

And the phone call did come. It would be another two weeks before he would be hers as he needed to be neutered and have some other treatment but on Saturday November 8th, she could pick him up. Her excitement was more than she could contain. We spent Saturday November 1st preparing her home for his arrival. There was a crate to be bought, a bed, bowls, treats, food and toys, lots of toys.

Early this past Saturday, we drove to Angleton to have breakfast with his foster mother and pick him up. My friend was nervous. What if he didn't like her? What if she couldn't do this? I tried to console her, told her he would love her, told her that he would guide her, that she would learn how to communicate with him and care for his needs.

His name is Piedmont. It appears he is a Basset Hound / Dalmation mix. He is somewhere between nine and ten months old and has an incredibly expressive and adorable face. His disposition is sweet, eager and very loving. He's afraid of water and not too fond of surprise movements or loud sounds. He'll work through that with her as his guide. Piedmont has a home now and from the way he's taking to his new Mom and his new home and his new friends, something tells me that Mom and the little guy are going to be just fine together. 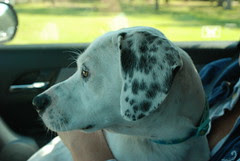 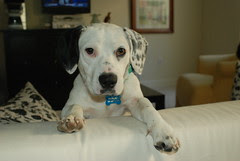 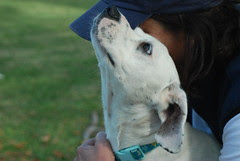 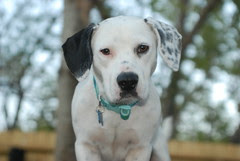 Posted by Duly Inspired at 9:05 AM

Moved me to tears! I'm not sure who is luckier!

who could not love a face like that? i mean really.

I love a story that makes me shed happy tears, and this one certainly did. Sounds like a perfect match was made.

"And above all, watch with glittering eyes the whole world around you because the greatest secrets are always hidden in the most unlikely places.” - Roald Dahl

dog joy ~ the happiest dogs in the universe

Cheyenne's crazy smiling mug is on Page 62 of this adorable book of smiling dogs. Curl up with it and you'll find that you are smiling as well!